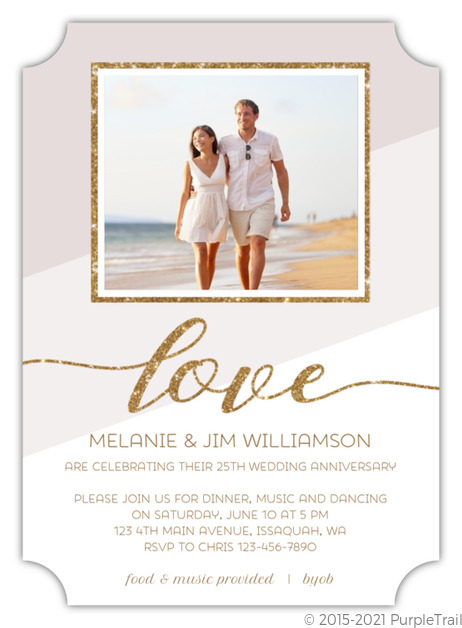 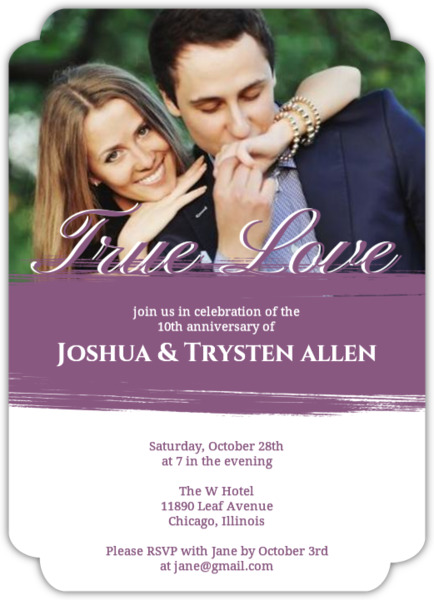 Complete with a black and white filter for your favorite photo, a dramatic palette, and sweet “true love” wording in elegant script, our Purple Painted Anniversary Invitations are favorites among customers. The colorful brushstrokes glossing over the center of card add a splash of color to the card, while alluding to the expressive nature of love and romance. The elegant die-cut trim puts a finishing touch on the entire design and helps tie everything together. These custom anniversary invitations are ordered often, likely due to the creative design and gender-neutral palette. 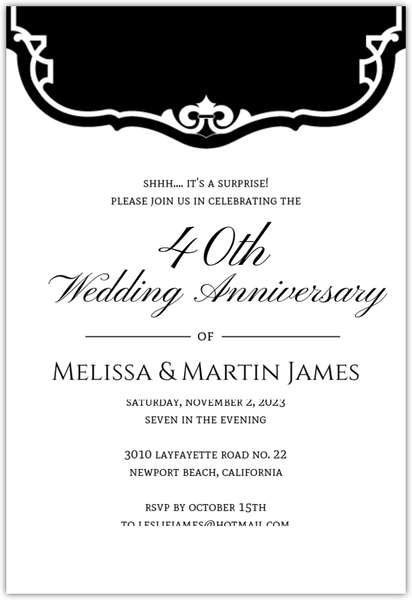 Consistently ordered over the past 4 years, our Black and White Vintage 40th Anniversary Party Invitations are often chosen for milestone years, like 40th, 50th, and 60th anniversaries. The simple palette is formal and clean, while the white vintage frame, throughout the front and back, adds definition and shape to the text and photo. Although customers love personalizing these photo anniversary invitations with their own photo, old or new, they rarely make changes beyond that. Use this classy template to make anniversary invitations that reflect your year and celebration, complete with custom wording, photos, and more. 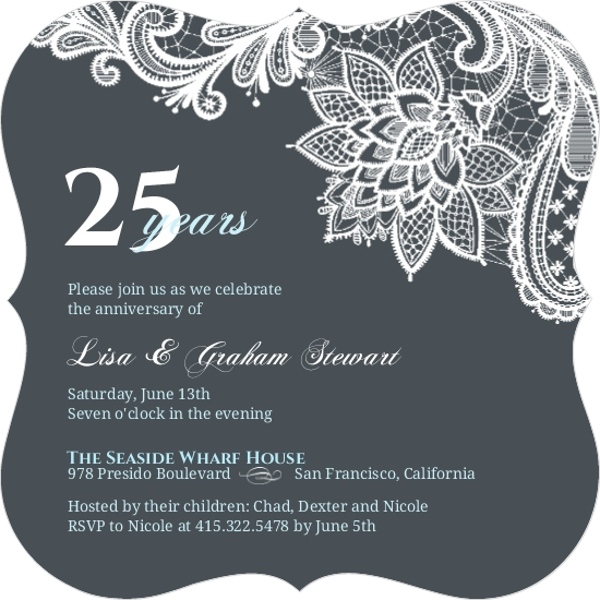 Although we have many lace designs, our Blue and White Lace 25th Anniversary Invitations are beyond popular. White lace borders drape the corners of these square die-cut anniversary invitations, while classy cursive script and simple typeface harmonize throughout the center. The deep blue background compliments the formal fonts and trimmings. The refreshing blue and white palette is a sweeter alternative to the traditional black and white motif featured throughout most formal invitations. These 25th anniversary invitations are very easy to personalize, yet we rarely see the colors or overall design changed. Like the wording, background and fonts, the die-cut trim can also be changed to your liking. These are available in a variety of colors, depending on the milestone you’re celebrating, so check out our other categories for more colors. 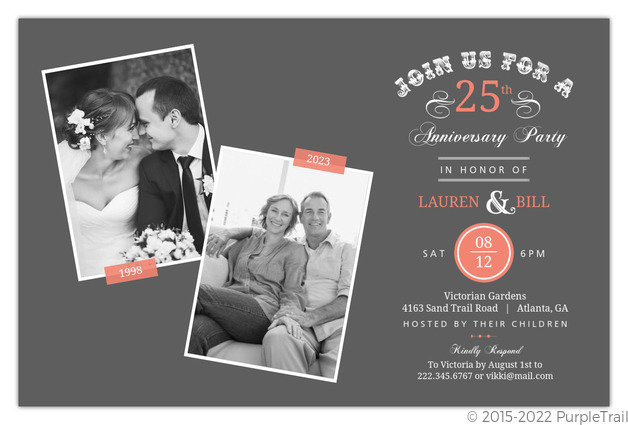 Our customers flock to our Coral and Gray Flashback Memories 25th Anniversary Invitations for a few reasons; one being, they love the flashback photos. They usually include a photo of their wedding day along with a modern snapshot. The photos are angled in different directions and secured with little washi tape accents, holding the year, giving the design a scrapbook look and feel. The right side of the 25th anniversary invitations provide colorful, fun typography, complete with an eclectic mix of fonts, borders, and colors for your anniversary wording. Customers enjoy the variety and find this design easy to customize due to the clean layout. Splashes of coral and white coat the gray background, while the opposite side features a bold coral and white striped pattern. 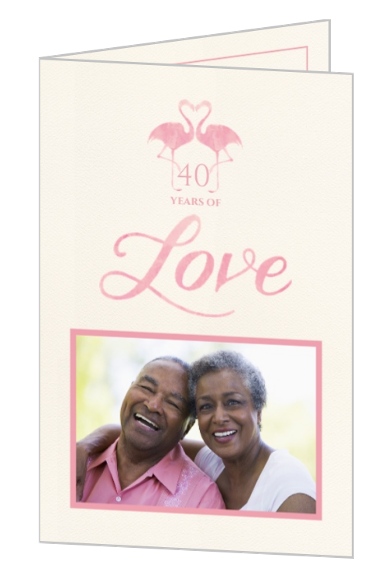 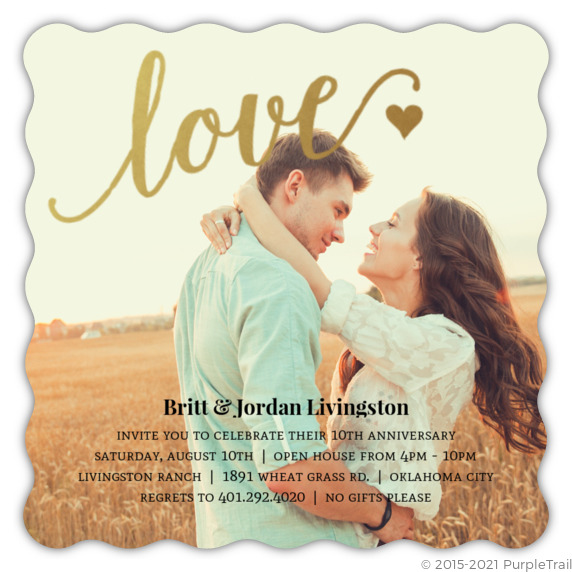 Customers love showcasing their photos on custom anniversary invitations and this design proves to be no exception. “Love” in faux foil script cascades across the top of the full-bleed photo backdrop, while clean, simple typography bears anniversary party details near the bottom of these romantic Faux Foil Love 10th Anniversary Invitations. These are very easy to customize with the ability to drag and drop photos and edit text boxes with one click of your mouse. Use this romantic template to make your own 10th anniversary invitations showcasing your favorite photo and details. 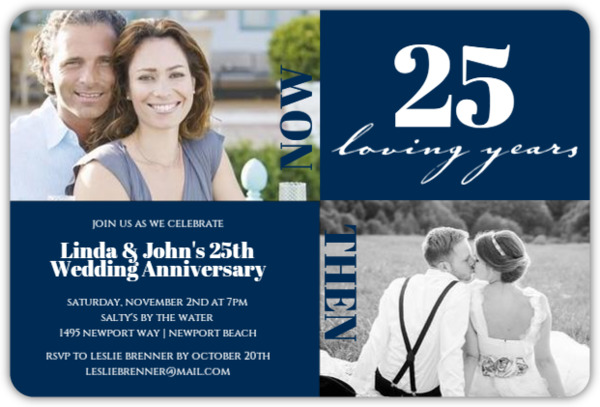 Customers love sharing old photos alongside new ones on our 25 Loving Years Modern Squares Anniversary Invitation. Whether you want to use these custom anniversary invitations for a different year or blue is not your color, you can easily make anniversary invitations that suit your celebration by personalizing this template with our online design tool. 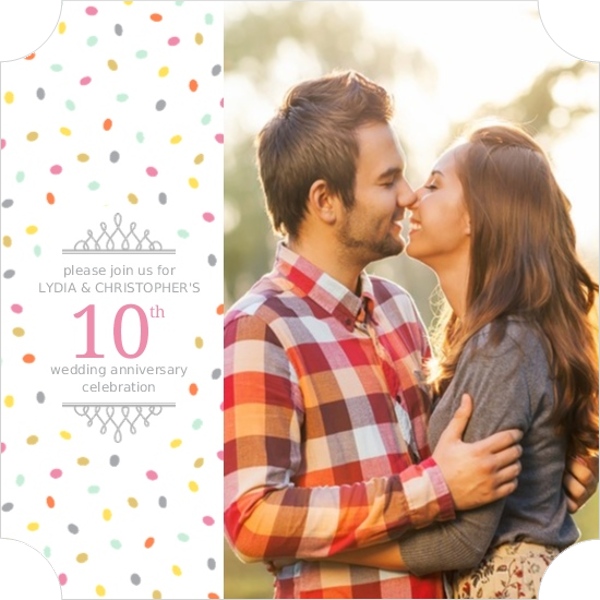 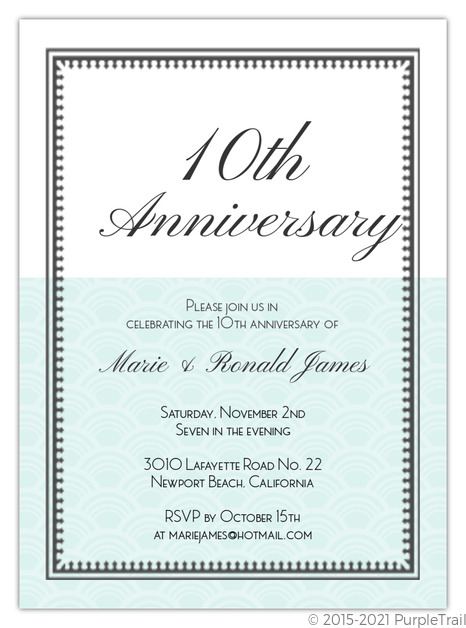 With classy fonts encased in a royal border resting on a partially white, partially scalloped background, these 10th Anniversary Mint and White Vintage Anniversary Invitations pay homage to Art Deco design of the early 20th century. While customers appreciate the sophisticated and elegant look of these anniversary invitations, especially when planning a formal celebration, the trendy gender neutral palette of mint, white, and gray is also enjoyed. You can find these vintage anniversary invitations in different colors throughout our various categories. Use this charming template to make your own 10th anniversary invitations, complete photos, colors, and wording of your choice. 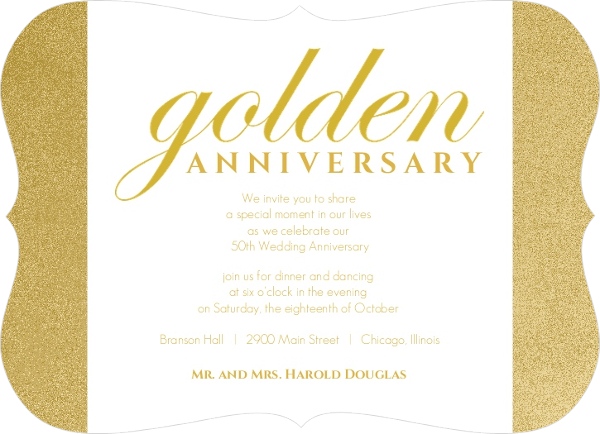 Highlighting the warmth and strength celebrated on 50th anniversaries through gilded hues, lustrous banners, and elegant cursive script, our Shimmering Golden 50th Anniversary Party Invitations have been favorites among customers for years. Veiled with shimmering gold banners and rambling cursive script, customers love the shiny, rich details and rarely change anything outside of the wording. The typography throughout the center is easy to customize with personal information and the overall formal appearance makes it ideal for any 50th anniversary party.

Make your own 50th anniversary invitations using this beautiful golden anniversary template now with our online design tool. Then, complete your party by creating your own custom party banner or custom anniversary guestbook to match your invites / party decor at PurpleTrail.com. 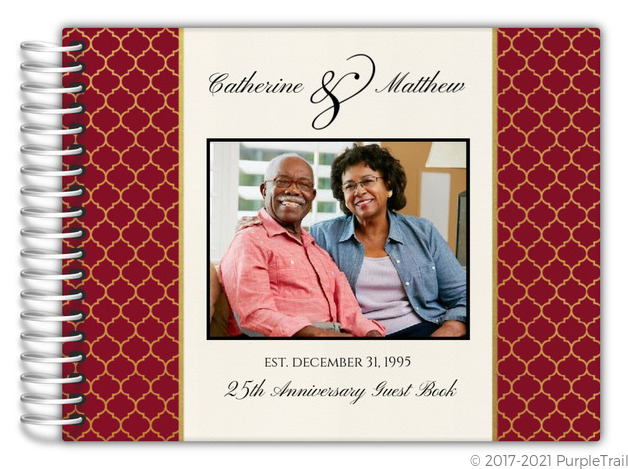 This and many other guestbook designs can be found and made at PurpleTrail.com

Select a Template & Completely Customize It

Pick from thousands of free templates for every occasion. We will professionally print & deliver to your doorstep